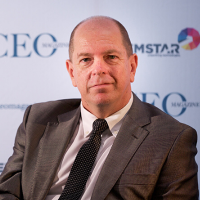 Head of Partnerships and Global Engagement

Chris has had a long background in international trade and investment. He worked in the private sector in chemical and oil trading, executive recruitment and food packaging and manufacturing – in Australia and in Japan – before joining the government.

Chris joined Austrade in 1992 to establish Austrade’s office in Fukuoka in southern Japan. He returned to Australia in 1997 as Regional Trade Commissioner based in Brisbane, covering Brisbane and Central Queensland.

Chris was Senior Trade Commissioner in Singapore, 2013 to 2016, when he returned to Australia to head up Austrade’s Northern Australia Investment program.